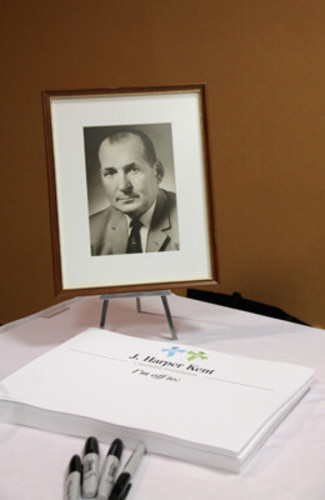 Mr. Kent was a second generation entrepreneur who acquired his fortune through various businesses, including the popular Main Street department store, a motel, a shoe store, a propane company, a bowling alley, and a movie theatre. His impact on the region was tremendous; many Bathurst residents can recall fond memories spent catching up with neighbors and friends at the department store.

Mr. Kent, along with his wife Gwendolyn, believed strongly in the power of education. He recognized that attending post secondary institutions could change both individual lives and communities as a whole. His love of the area, and desire to help others, ignited a vision that creating a scholarship program would allow students to return to the Bathurst region and contribute to its cultural, economic, and social prosperity.

Since the foundation was established in 1976, it has awarded more than 6.7 million dollars to students from the region. The value of the scholarships have increased in value to echo Mr. Kent’s strong dedication to education, as well as to address rising costs of tuition. Full tuition is awarded to successful recipients. The scholarships are unique in that the foundation takes a very holistic approach in awarding them, looking at not only academic achievement and financial need, but also community involvement and future aspirations.

Mr. Kent passed away in 1987, the same year that he received an honourary doctorate from the University of New Brunswick. Until her death in 2005, Mrs. Kent remained active on the foundation’s board and selection committee, helping to ensure that her husband’s vision would continue to benefit the region’s students for years to come.

Be sure to check the deadlines.

You would be very surprised how often students miss this deadline so our advice to you is bold and simple...